Having Reverence for Our Practice 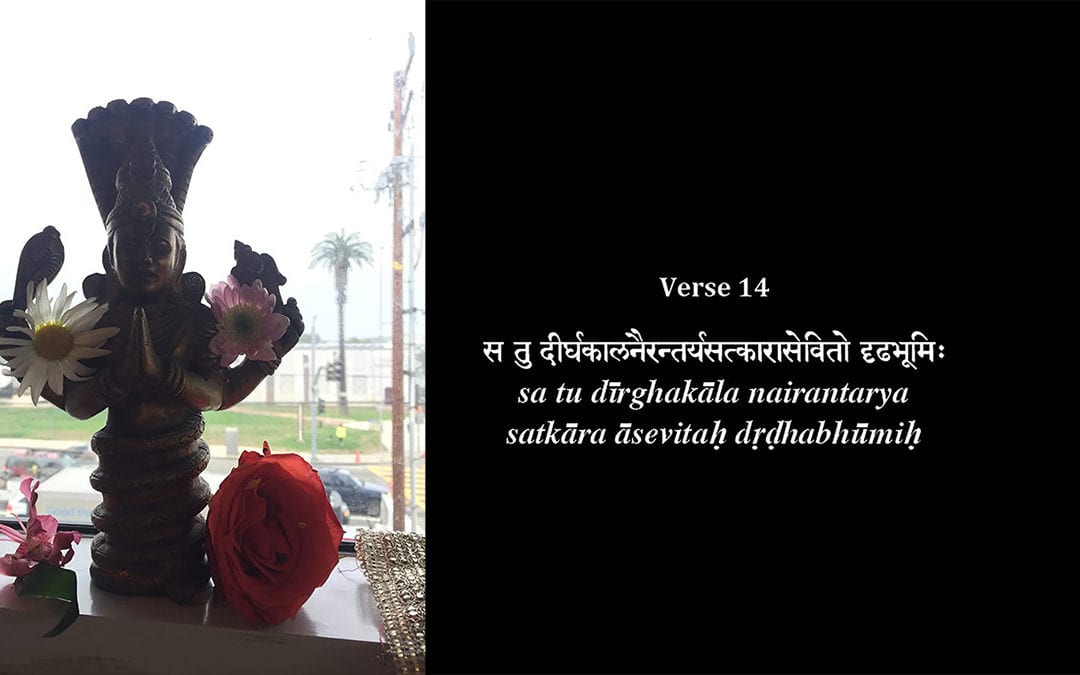 Patañjali’s sutra 1.14 is widely regarded as one of the most important, oft quoted by Sharath Jois:

“Perfection in practice comes when one continues to practice with sincerity and respect for a long period of time without any interruption”.

I very much appreciate Pandit Rajmani Tigunait’s translation and explanation of this sutra.

sa that tu verily, definitely dirga long kāla time nairantarya continuously, without any interruption satkāra with respect, reverence, rectitude, seriousness āsevita fully attended, completely served dṛḍha firm, strong, unshakeable bhūmiḥ ground
Your practice will bear fruit when it encompasses three secrets to success in yoga. You have to practice for a long period of time;  Your practice must not be interrupted—you must do it regularly; and  You must do your practice with love and respect. They say that practice makes you perfect. But practice simply makes you a practitioner. It is perfect practice that makes you perfect. Perfection in practice depends on the three main elements described in this sutra. Why are these three components so important? Our personality is made up of our habit patterns, and habit patterns are formed by our repeated actions. When these habits are refined they are deposited in the mindfield in the form of subtle impressions called samskaras. And when similar samskaras are joined together they are called vasanas, a group of impressions big enough and strong enough to take over our mind. Vasanas come from deep within, and they motivate us to think, speak, and act in a manner that is congruent with them. To trigger these vasanas, all you need is a single spark—a tiny excuse. For example, take someone who is angry by nature. Through his repeated acts of violence he has formed the habit of being violent, and all the subtle impressions of violence are stored in his mindfield. As simple an excuse as someone honking at him at a stop sign triggers his anger. He turns red and begins to swear. He may even pick up his handgun and shoot. These powerful habits are formed over a long period of time, and therefore the process of undoing them will also take a long time. You must not expect instant transformation. You need to do your practice for a long period of time in order to generate new, spiritually illuminating, positive, constructive habit patterns that can neutralize your negative habit patterns and initiate a long-lasting transformation from within. You also need to do your practice regularly. Everything in the world is regulated by time and space. Cause and effect are totally dependent on them, and that is why, to breathe life into your practice, you must do it regularly. You may have noticed in your own life that it is hard to start a practice in the first place—and even harder to restart it once you have let it lapse. Irregularity breeds procrastination—a hurdle that is hard to overcome. Finally, you can continue your practice for a long period of time, without interruption, only when you love it. If you have not cultivated love and respect for your practice, it will be a continuous struggle to do it—and practicing without joy is torture. It is no longer the ground for self-discipline. Sooner or later you are bound to quit.

I have seen how when one leaves out even one of these aspects, yoga does not happen:

The Power of the Practice

Yoga is powerful.  If you practice correctly you will have great success:  you may even develop siddhis, special powers.  In fact the third chapter, the Vibhūti Pada of the Yoga Sutras of Patañjali, are all about these siddhis which arise from sustained and focussed yoga practice.  Patañjali warns that power is not the ultimate goal but merely a byproduct of the practice.  If you get attached to the power or to the good feelings yoga brings up, or to how bendy or strong your body is, you will miss the point.  It will all become about the ego, when the purpose of yoga is to let go of and move beyond the individual ego.

The Intention of our Practice

Really knowing the purpose of yoga practice is important in keeping the mind clear.  The end goal of yoga is self-realisation, nothing else.  Somehow this has become very confused in the modern world, where yoga is misrepresented as pretty postures and has become a shallow commodity.  As practitioners it is important to often remind ourselves of the true goal of yoga and reflect on this internally when we feel frustrated by our physical āsanas or obsessed with merely acquiring more poses.  Ask yourself regularly “why do I practice?”  If you truly recognise this yoga as a serious quest and are conscious of the sacredness of this endeavour each time you step on the mat, it will give you much greater clarity of mind and freedom in your practice.  Yoga is not frivolous and our intention should always be fresh in our minds.  Yoga should make us happy, and at least, if not enlightened, in states of mind that are progressively becoming less dark.  Your bhavana will effect the outcome.

Nearly all eastern teachings about self-realisation (samadhi/moksha/liberation/freedom) speak of the necessity to let go of the individual ego in order to merge into universal consciousness.  Yoga does after all translate as “oneness”.  The more we identify and uphold the pillars of the individual self, the harder it will be to find freedom.  I remember when I first came to the US how amazed I was at the impressive amount of labels people would put on themselves.  Not only do they strongly identify with themselves as US citizens (hence all the flags), they also are proud of their State, their college, their sports teams and so many other individual identifiers.  The more labels we attach to ourselves, the more difficult it becomes to dismantle the individual ego into the oneness and move beyond duality.  This might be a foreign concept if you have not studied eastern philosophy.  I highly recommend “I am That” by Nisagardatta (Vedantic teachings).

If we cannot tame our ego, it is very difficult to learn.  We are meant to approach all teachings with humility and the attitude of knowing nothing.  Only then can we be open to receive.

I heard today that violent crime in my home city, London, has increased rapidly this year, particularly amongst young teenagers  When one ER doctor was interviewed by the BBC and asked to try explain it, his theory was that on social media these days people take offence so easily and things that would have been ignored in the past, now very quickly escalate.  I think social media has become a tool that rapidly inflates the ego.  And of course the more inflated the ego, the more easily one gets offended and becomes over-sensitive to criticism.  If one cannot be open to criticism, one can never learn or grow.

As much as we should submerge ourselves in the practice, we should not really talk about it too much.  In the Shiva Samhita it says that the practitioner should keep his practice secret “just as a virtuous wife keeps her intimate relations between herself and her husband quiet”. This develops the love between husband and wife. Similarly, if one has any respect for one’s own inner journey, one cultivates one’s practice privately.  The Hatha Yoga Pradipika says “The yogī desirous of attaining success, should keep the knowledge of hatha yoga very secret.  It will be potent when kept secret and ineffective when publicly revealed.” (verse 1.11).   Try to practice more than you think about your practice or talk about it.  Posting pictures of oneself doing asanas or sharing things one has been taught on social media misrepresents the practice and harms us by making it a narcissistic endeavour.  It always amazes me how many people do this, particularly beginners who have not perfected their practice over many years.  When one takes something one has been taught and does not yet “own” from many years of study and mastery, it is considered stealing in the yogic tradition.  To do this publicly demonstrates a remarkable lack of awareness.  Yes, alas, there are also those who have been practicing for many years who do this too:  demonstrating that practicing incorrectly for a long period of time can sometimes cause narcissism and delusion.  The only thing I can say in their defence is that at least they have actually mastered the āsanas they demonstrate and thus are not stealing them.

Another aspect of valuing and respecting our practice is being prepared to make sacrifices for it and inconvenience ourselves for it.  This is a tough one in the US where many chain ‘yoga’ studios try to cater to the students every whim and keep them as comfortable as possible.  I believe companies like YogaWorks and the Groupon “out for a bargain” mentality in America has miseducated people into thinking it is okay to take precious things for free or without paying a fair amount.  We are not meant to take things for less than what they are worth – that also is stealing according to Sharath.  In fact a yogi should never really take anything for free.  We should always try give more than we take.   Be generous in all things.

One of the most important practices is that of gratitude.  It all comes down to this.  We chant to the Guru and to Patañjali every morning, grateful for this practice which has been preserved for us.  We approach our practice with humility.  To be truly thankful and to treasure this practice we continue it without interruption, for a long time, with faith and devotion.  Liberation is attainable for all in this lifetime if you have the motivation, zeal, correct intention and a humble grateful heart.  Don’t waste this precious life.  Grasp this chance which has been offered to you. It is so much more worthwhile than momentary gymnastics…